It is not unknown that AngularJS stands as one of the most widely used Web Development Frameworks. And I have already written a blog dedicated entirely to What is AngularJS and its advantages. But What’s missing in that blog is information regarding the various AngularJS Frameworks that further simplifies Application Development. So In this blog, I am going to jot down the Top AngularJS Frameworks recommended by expert AngularJS developers at ChromeInfotech.

But before that, I would like to answer some questions that people often ask about AngularJS:

AngularJS is a JavaScript-based structural framework used for client-side development of web apps and is useful for developing dynamic Web Apps. AngularJS allows Web developers to use HTML as the template language and extend its syntax to convey the components of a Web Application easily. Developers use AngularJS since it speeds up and brings efficiency to the development Process through its inbuilt features and libraries.

What is the difference between AngularJS and Angular 2?

Angular2 is the newer version and a complete rewrite of AngularJS. So they are the same. The only difference between AngularJS and Angular2 is regarding their features. Angular2 and Angular 4 consist of new, improved features which AngularJS lacks.

Why Angular is so popular?

AngularJS is one of the most popular frameworks among developers as well as Entrepreneurs.

And thus, has a huge role to play in JavaScript becoming the most popular Scripting/Programming Language (According to a Stack Overflow Survey). The reason why Angular is so popular is that it uses HTML as the template language to produce Modern Apps that are Dynamic, Responsive, Out of the ordinary and User-Engaging. And this is the type of App that Businesses require to survive in today’s highly competitive world.

What are AngularJS Frameworks?

We know that AngularJS has made it much easier to build Robust and beautiful Modern Web Apps. But developers didn’t stop at that. To further simplify tasks and increase efficiency, they came up with various Front-end Frameworks for AngularJS. These Frameworks come with various in-built Web components and by using them along with AngularJS, One can quickly build up an Application from Scratch in no time.

Now, there are many such Frameworks and selecting one for your Project can be quite confusing. So I have drafted a list of the Top AngularJS Frameworks.

It is crucial to choose the right technology Stack for your AngularJS App Development Project. And it also includes determining the best-fit AngularJS Framework to support the Development Process.

Now ChromeInfotech is a well-established Company that provides Custom Software development Services and specializes in various JavaScript technologies like Node.js, MEAN Stack, React Native and particularly in AngularJS. So We have expert AngularJS developers who recommend the following AngularJS Frameworks for your Project: 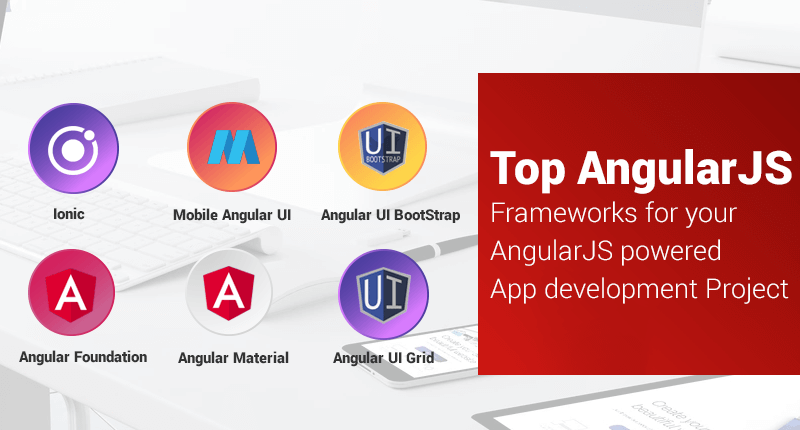 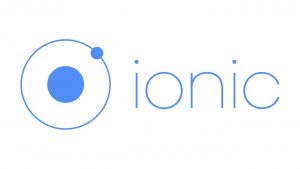 Ionic is one of the most popular AngularJS Frameworks. It is an Open source, Cross-platform Framework used for building Hybrid Mobile Apps. So Ionic is a mobile app development framework that uses Web technologies like HTML5, CSS, and Sass to develop hybrid mobile Apps which can function across multiple Platforms (iOS, Android). It works as a front-end SDK built on top of AngularJS and Cordova. The Ionic mobile app framework constitutes Various Angular directives and components. And this leads to easy development of beautiful and user-friendly AngularJS powered mobile Apps.

So, Is Ionic a Good Framework/ Is Ionic Good for App Development?

Yes, It is. Ionic is one of the best AngularJS mobile Frameworks. The blend of AngularJS components along with the functionalities of Ionic not only helps accelerates App development but also produces high-quality Mobile App Solutions with beautiful User Interface. Here are some reasons

Why Ionic is a good framework for app development:

Please Note– Since its official release in 2013, many new versions have come up in the market. And each of the variants works with various versions of AngularJS namely Angular2 and Angular4. But the new version, Ionic 4 is not restricted to only AngularJS. Ionic4 now works with any front-end Frameworks.

What is Mobile Angular UI?

Mobile Angular UI, yet another popular AngularJS UI Framework is a combination of AngularJS and Bootstrap. Developers use it for building HTML5 Mobile Apps also known as Hybrid Apps. Dedicated to mobile app design and development, it offers essential mobile components which are otherwise missing in Bootstrap 3 like Sidebars, switches, overlays, scrollable areas and more. And Since it revolves around AngularJS, there’s no jQuery dependencies or bootstarp.js, making it a lightweight and faster framework. Moreover, it comes with a CSS file using which you can easily convert your Web App into a Mobile version.

The latest version of Mobile Angular UI(1.3.4 as of writing) is compatible with:

And it supports a wide range of browsers including:

This AngularJS based framework revolves around robust platforms like:

Also, to get things going, you can refer to any Mobile Angular UI tutorial available online. Here’s one such tutorial that I feel can be very helpful if you are new to this framework.

So if you are still pondering over the questions “Can we develop mobile App using AngularJS?” and “Is angular good for mobile?”, Then Here’s the correct answer: No, you can’t make native mobile Apps using AngularJS because it is a Web Framework. But Yes, AngularJS can be used for developing Hybrid Mobile Apps. AngularJS Mobile frameworks like Ionic and Mobile Angular UI are the best framework available for AngularJS for mobile app development and are the reason why angular can be good for mobile as well. Moreover, with these Frameworks in hand, you don’t need dedicated Android developers or iPhone developer for your Project. One codebase works for all!

What is Angular UI Bootstrap?

What is Angular Foundation?

So if you are more comfortable working with “Foundation” or you find it to be better than “Bootstrap,” then you should consider Angular Foundation for your Project.

What is Angular Material?

Angular Material is an Angular CSS Framework maintained by the Angular team and is the officially recommended Angular UI Framework. Angular Material is a UI component Library for AngularJS developers and integrates seamlessly with Angular. This framework is based on Google Material Design and has over 30 UI components. And thus, it facilitates developers to build User-engaging, attractive, responsive and faster Web Applications by ensuring that they adhere to modern design principles and practices like browser portability, device independence, graceful degradation, etc.

As of writing, the latest version of Angular material is 7.3.7, and it comes with Angular components such as:

The Angular UI Grid, formerly known as ng-grid is built 100% natively in AngularJS and hence has no jQuery dependencies. This framework revolves around a core grid module while all its features are present as of Angular modules and Directives. It comes as a component of the Angular UI Suite, similar to Angular UI Bootstrap and is a component for displaying data in grids(rows and columns) for AngularJS applications. AngularJS developers can use this framework to work with and handle vast (more than 10,000 rows) and complex sets of data with grid features such as sorting, grouping, filtering, virtualization, paging, exporting, column pinning, row expanding Virtualization, Edit in place, Internationalization and many more.

It relies on Plugin architecture; hence you can use the features that only you need. Moreover, it also offers options to customize templates and alter the look and feel with changes in the CSS. Here’s what you can get in the core module:

These are some of the top AngularJS Frameworks recommended by ChromeInfotech’s expert AngularJS developers. All the above AngularJS UI Frameworks have their own set of features and potentiality. And So, Our developers believe that it won’t be fair to single out one as the best AngularJS based Framework.

The best Framework will vary from one Project to another. Every Project is different and so are their needs and requirements.

So for your AngularJS development Project, you need to wisely choose a framework that best fits or is in the best interest to your Project needs such as features, functionalities, components, etc. Once you do that, you will be able to get your App up and ready in no time.

ChromeInfotech is a reputed AngularJS Development Company and houses dedicated AngularJS developers proficient with all the Frameworks mentioned above. This allows us to cater to every Project type and build Custom AngularJS powered Applications that are Attractive, modernized and of top quality.

Moreover, they are well trained and proficient in various emerging/trending technologies like IOT and Blockchain development along with tools and techniques such as Chat SDK, App Analytics, Payment Gateway Integrations, Map Integration, Tableau, Cloud Computing and many more.

So if you are looking for something Out of the ordinary and in the lines of AngularJS, then please feel free to get in touch with Us.

Also, do not forget to drop in your feedback regarding this blog in the comment section below.