This blog discusses the latest version of PHP called PHP 7. Here we will discuss all the significant PHP 7 Features which is in the latest PHP version, and how those can benefit both PHP developers and Entrepreneurs for business based PHP application development.

So let’s start and discover some significant aspects of PHP and the considerable advantages of its latest version. Also, let’s see how PHP 7 is far better than PHP 5 and all other previous PHP versions released until now. Being an experienced PHP development company, we did a comprehensive analysis of the PHP 7 version.

What Is the Latest PHP Version?

This new version consists of further improvements and a new version of the ZEND ENGINE. PHP 7 is the most significant update in the history of PHP language since its release in the early 2000s. 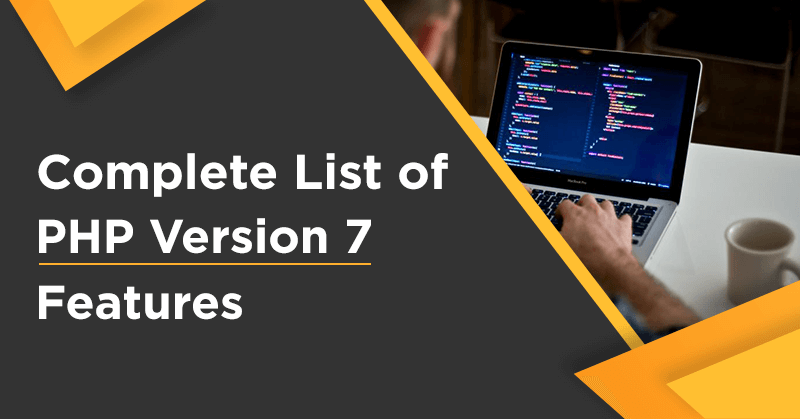 What are the Key Highlights of PHP 7 Features ?

PHP 7 New features include a huge performance upgrade from the previous version PHP 5. All the irrelevant and unnecessary components and aspects that did not serve any productive propose were removed. Also, with that, new features and functionalities that simplified the process of PHP application development were introduced.

To name a few of them,

When was PHP 7 released?

Below are various versions of PHP 7 till date –

So, before I begin discussing the list of PHP 7 features in detail, please take note that all the features discussed below include the above sub-version of PHP 7, viz., PHP 7.1, 7.2, and 7.3.

Hence, with that said, let’s start.

Some of The Fundamental Changes Done in PHP 7

First of all, a lot of PHP related error mechanisms were eliminated in the PHP current version along with being replaced by modern-day object-oriented exceptions. (This is a part of ERROR HANDLING and EXCEPTION HANDLING practices in PHP).

Also, the use of operator like ->, [], (), {}, and :: was introduced to make the syntax of variable de-referencing a bit more consistent and complete.

Likewise, the support for PHP-4 style constructor methods was removed as it was seen as an obsolete practice.

Moreover, PHP 7 became more consistent. Earlier few in-built classes that returned null value on the failure of any specific operation now returned an exception instead and maintained better consistency of the application functioning. This is another one of the most significant advantages of PHP 7 that was brought forward by the PHP developer community.

Similarly, multiple SAPIs, also known as Server Application Programming Interfaces that were not maintained for so long were removed along with deprecated extensions.

Also, PHP 7 removed the support for ASP styled delimiters such as <% and %> and <script language=”php”> … </script>

Another major improvement was they fixed one major critical programming related issue – where the Switch Statement had multiple default clauses.

Furthermore, PHP 7 changed left-shift as well as right-shift operators in a way so that it performs consistently across multiple platforms. This particular PHP 7 operator set improved application performance aspects majorly.

Moreover, the conversions that took place between integer and float numbers was made more consistent in terms of implementation across multiple platforms.

Therefore, because of the above implementations, PHP 7 performance is even better than its predecessor.

What Is the Difference Between PHP 5 And PHP 7?

There is a significant difference performance-wise. The same piece of PHP code in PHP 5 gives less performance than PHP 7. If you go on and run a particular PHP code in both PHP versions viz., PHP 5 and PHP 7, you will get a significant performance improvement in PHP 7. That specific PHP code will run faster in PHP 7. That’s because PHP 5 uses the Zend II engine. But one of the biggest PHP 7 main features is that it uses the PHP-NG also Called PHP next-generation engine. It is a brand new model of PHP Engine that improves application performance tremendously.

With the introduction of type declarations into PHP 7 version, developers can explicitly specify the data type of any given variable rather than allowing PHP to set that automatically. Through type declarations, you can set specification to get desired results from your PHP 7 functions and also make it easy to read.

What is Return Type in PHP?

The latest PHP version PHP 7 also supports all the existing data types as return arguments. The main advantage of return argument is that they allow you to define what your code should return when a specific PHP 7 Functions consisting of PHP 7 code gets executed.

PHP 7 has complete advanced support to tackle advanced error handling aspects. Suppose you have inputted an incorrect value. Now PHP 7 will not give you an erroneous output but will stop executing that particular task. In the end, you will get a message as – Incorrect input. Similarly, PHP 7 has efficient exception handling done through optimized techniques.

Features of PHP 7 also includes Easy User-land CSPRNG. User-land mainly refers to the application space, which stays external to the kernel and generates random data. It is an easy to use and reliable Cryptographically Secure PseudoRandom Number Generator in PHP.

First of all, in the PHP 7 Version, we saw the introduction of a special feature called as Unicode CodePoint Escape Syntax. As a result, the main benefit of this integration into the latest PHP framework is that this particular syntax allow escaping of Unicode CodePoint as depicted below –

mysql_* PHP 7 Functions were all Deprecated

Furthermore, in the latest PHP version , all the mysql_* functions have been deprecated. Instead, developers can now use the mysqli PHP 7 functions . Also, these are the advanced and intelligent version of the general MYSQL functions that developers can use to write better functionalities.

Moreover, in PHP 7, we have anonymous class working even better because now through them, developers can take care of one-off objects. Also, Anonymous classes in PHP are super beneficial because PHP programmers can define a class as well as instantiate an object inline rather than making it non-inline. So what’s the main benefit? – Better PHP code writing practices.

Through a PHP 7 Syntax Checker , PHP 7 interprets array keys, methods & properties in a left-to-right manner and evaluate it.

Now after discussing all the above features of the latest version of PHP called PHP 7, here are few things that you can infer straightaway –

PHP 7 is indeed a boon to PHP developers, WordPress Developers, and to every entrepreneur who wants to develop a business website based on PHP tech.

Before We conclude, Some PHP Technology Basics Not to Forget

What Is PHP in Simple Language?

PHP stands for Hypertext Pre-processor. It is a scripting language through which people can make interactive web pages and does many dynamic things. PHP code powers these web pages and they run on the PHP web server to perform complex tasks and activities. Developers can learn PHP fast as it is easy to learn.

What is PHP good for?

PHP is one of the excellent server-side programming languages. It is one of the most popular high-level programming language that developers use mainly for server-side scripting because of its simplicity. Also, you can also do command-line scripting with PHP and write desktop applications with PHP. So if you want to know – Is PHP good for web development? The answer is definitely YES!

Why do we use PHP?

Here are Top 4 Reasons to Use PHP technology and preferably the PHP current version available for business application development.

Finally, coming to an end, the above set of PHP 7 Features are genuinely great for the productivity of PHP developers.

Moreover, at ChromeInfo Technologies, each of our PHP developers uses the latest version of PHP to build high performing business web apps.

Certainly speaking, not only the above features present them with options that enhance their productivity but also helps them to speed up the PHP web application development timeline.

Hence, the PHP Current version is no doubt the best PHP version of 2019 for business web app development.

So, with that said, here’s what we have to say about PHP 7 finally. It is –

ANOTHER THING TO NOTE BEFORE YOU LEAVE –

Do not forget to leave your valuable comments about this blog below. We appreciate your helpful feedback that will help us to improvise further on multiple aspects.