Do you know about the difference between Django Vs Laravel? Let me tell you some essential secrets between two major programming language. It will help you to decide which platform would be best for your app.

Here in this post, I am going to tell you the big secrets. So, let me tell you who we are –

As ChromeInfotech, we are a leading software development company, and we offer excellent service to all our clients. We have a pool of dedicated developers, programmers, designers, and engineers. They have years of experience and skills to give you the best solution to your needs.

You also can get in touch with us if you need professional assistance.

Now let me continue with the article –

Despite the popularity and the rising demand for mobile development, web development has been getting a tremendous amount of attention and technologies are evolving quite rapidly.

However, it can create some complications, especially for young developers who are new in this era.

The sheer amount of available technologies to choose from, the different functionalities they provide, the differences in each one of them and the fact that there’s no holy grail in web development, nor a one solution fits all, all of this makes it quite scary to embark on a learning journey.

This is why we’ll attempt to demystify the process and shed some light on these different technologies here. Two common technologies in the web development world are Django and Laravel, which are back-end development frameworks.

But let’s slow down a second, and talk about what a framework is –

Django is an open source framework for web development which written in the Python programming language. The architecture pattern followed by the Model View Template (MVT) in Django. The Django framework has used to develop complex web applications.

Django framework developed by the Django Software Foundation. It was initially released in the year 2005. Django was licensed by 3-clause BSD (Berkeley Software Distribution) license.

Laravel is an open source framework for web development which written in PHP programming language. The architecture pattern followed by the Model View Controller (MVC) in Laravel. It has created and developed by Taylor Otwell.

Laravel was licensed by MIT License. It was initially released in the year 2011. Laravel provides a rich set of functionalities similar to that of Ruby on Rails. Laravel needs basic or advanced knowledge of PHP. It can utilize to develop a Content Management System (CMS) applications.

Django is being used in some well-known websites like Mozilla, Instagram, Bitbucket, Pinterest etc., All the maintenance and releases will have managed by the Django Software Foundation.

Moreover, Django is lightweight and has a standalone feature for development and testing purposes. The primary goal of the Django framework is to ease the development of complex web applications in lesser time.

Laravel has to upscale feature in terms of more user traffic. The development time can reduce in terms of framework feature which provides inbuilt features to ease the life of a developer. Laravel has good features to develop a web application from scratch in an easier way.

Key Differences Between Django vs Laravel

Below are the lists of points, describe the key Differences Django vs Laravel performance –

Comparison Table Between Django and Laravel

Following is the comparison table between Django vs Laravel performance – 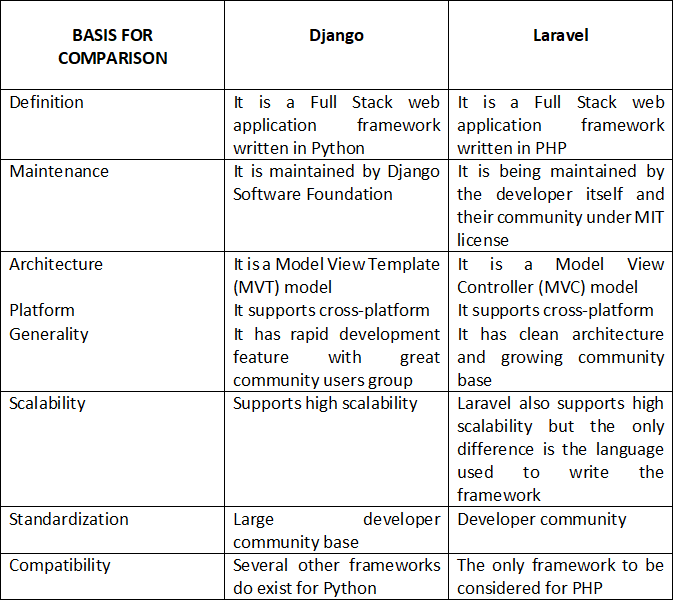 Django web application framework supports Python whereas the Laravel supports PHP. The only differences between Django vs Laravel frameworks are! The language they support and there are several different features and libraries exist to fulfill different requirements.

There exist a lot of pros and cons as well as to understand the differences between Django vs Laravel performance. In terms of scalability, easier development, maintenance, and testing.

Django is highly considered where Python also provides faster execution which further improves the speed of the application.

If you are looking for the best Django Vs Laravel Developer for your next big project? Or you confuse about which platform is best to use for your product, let’s have a call with us.