10 Incredible Ways How AWS CodePipeline Can Benefit Your Business

Being a 9-year-old Well-established Software Development Company, We at ChromeInfo Technologies understand and are aware of the fact that the Software Development Landscape is ever-changing. With Digital Software Products rapidly taking over every Industry Vertical, it has become absolutely necessary for Software Development firms to adopt new development approaches or practices to meet the increasing demands of the Industry and growing expectations of Users/Customers.

One such method that has gained massive attention in recent years is DevOps. And one of the popular Services/Tools that helps in implementing DevOps practices is AWS CodePipeline, which is going to be the point of discussion in this blog.

But First Here’s a little Overview of What exactly is DevOps?

Well, DevOps is not a development tool or platform. But rather a culture that includes a set of practices, philosophies, and tools.

It aims at integrating the development and operation teams to increase an organization’s ability to accelerate the Software Delivery process.

What allured us to adopt DevOps is that it not only shortens the development cycle but also allows us to:

Now, one of the practices that form the pillar of DevOps culture is Continuous Delivery.

Continuous Delivery is a Software Development approach that automates the release process of your Software Solution.

It allows developers to quickly deliver new Software Products or upgrade existing ones in short cycles and ensure its release at any time.

What is AWS CodePipeline?

What does it do?

AWS CodePipeline enables developers to model, visualize, and automate the steps that lead up to the release of your Software.

Traditional Software deployments are lead mostly by manual work. From expert scripting to testing and troubleshooting, every stage of its delivery pipeline requires manual inputs.

It slows down the deployment process of your Software and increases the risk of poor or error-ridden releases.

What AWS CodePipeline does is that it allows Developers to model every step of the release process, including building your code, deploying to pre-production environments, testing your application, and releasing it to production.

Once developers make any changes to the code, AWS CodePipeline detects those changes, then builds, tests, and deploys the application as per the defined workflow.

Automation is how this tool facilitates stable, quick, and frequent delivery of Bug-free and reliable Software Product.

How does AWS CodePipeline Work?

The following event takes place when the developer(s) commit changes to the source repository like GitHub, AWS Codecommit, etc.:

These steps represent the overall CodePipeline Workflow. One can configure the Pipeline to be either simple or complex as per the Release Process.

Below is an image showing the stages of the release process using CodePipeline: 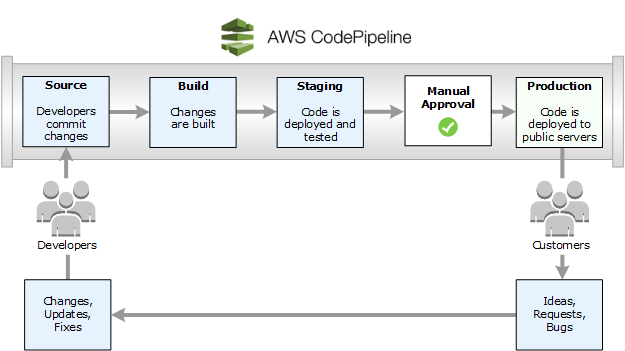 More and more companies are turning their attention towards implementing the Continuous Delivery process into their Development environment.

And with that, there has also been a rise in the adoption of AWS CodePipeline.

There are numerous features of CodePipeine, which makes it a favorite and preferred Continuous Delivery Service among developers.

Moreover, It also imparts benefits to all Business Venture, irrespective of their size, or Industry Vertical.

Here’s some insight into:

What We as a leading-edge Software Development Company love about AWS CodePipeline and Why We don’t plan on abandoning it anytime soon.

We have highly experienced developers at ChromeInfotech.

But no matter how proficient they are, carrying out tedious and repetitive tasks such as filling bug reports every time a defect gets discovered will hold them back from being productive and from utilizing their full potential.

To prevent such scenarios, We implement AWS CodePipeline.

With this, We can configure pipelines to automatically execute these tasks rather than carrying out manually by Our developers.

This way, Our development team can focus on the broader vision and other essential aspects of the project instead of wasting time going over past codes written a long time back and fixing code issues.

In short, Continuous Integration with AWS CodePipeline allows Our team to be more productive by eliminating the need for performing such tasks manually.

We have been working with AWS CodePipeline for quite some time.

And one aspect of implementing this tool that has impressed us is:

The ability to continuously test code changes and detect bugs in the early stages.

They perform manual tests only when the code is in its final stages.

So the presence of bugs is only detected close to the end of the Project.

This makes solving the issue a difficult task, which may ultimately lead to either stretching the delivery timeline or a very sloppy job at solving the problem.

By automating Our build, test, and release process, We get to test every code change and quickly detect bugs before they are live.

It allows us to fix issues at the start before the bug gets to the point of affecting the Product.

This not only saves a lot of Our time but also helps us ensure the production of quality codes.

Yes, We employ AWS CodePipeline because it benefits Our development team.

But it’s not just the only reason.

One of the other reasons why We confide in this tool is because of the ways Our Clients and their businesses can benefit from its usage.

By Automating the release process using AWS CodePipeline, We can speed up the release of new features to your Users.

What’s the reason behind such acceleration?

Well, first of all, the manual release process is a tough task.

With automation, Our developers can quickly and easily test every changed or updated code. Also, they can identify bugs at the initial stages while they are still small and easy to fix.

In your traditional Software Development process, many changes were delivered together in a single big release.

Customers would have to wait for the next release (usually months) for a bug or issue to be fixed.

But with CodePipeline, We can continuously move small batches of changes that Customers can immediately access.

Such speed is an essential requirement these days because a new or improved feature is what it takes to increase Business value.

You already know that one of the benefits of AWS CodePipeline is speed.

But speed without quality is practically useless, right?

Well, with CodePipeline Our developers can not only speed up Product release but also raise its overall quality.

What happens is that immediately after a code commit, the entire codebase goes through a series of tests and quality checks.

Developers get notified if there’s an issue, who then fixes it before heading ahead to the next task.

CodePipeline facilitates developers to conduct frequent and continuous testing, which ultimately results in fewer to almost zero bugs in the final released product.

Here’s another excellent reason why We prefer sticking with AWS CodePipeline:

The ability to design a customized Development workflow that fits into Our’s as well as Our Client’s needs and preferences.

It provides us the flexibility and adaptability required to customize every step of the product delivery process. This includes builds, tests, and deployment.

One can achieve this through Amazon GUI, APIs, AWS SDKs, console, AWS CLI, and more.

AWS CodePipeliner provides a graphical User Interface using which We create, configure, and manage Our Pipeline along with its various stages and actions.

This helps us to visualize as well as model Our release process workflow for each Project.

We also use CodePipeline to model Our builds, tests and deployment actions to run in parallel so that We can boost Workflow speeds.

AWS CodePipeline has succeeded in gaining popularity because it can be easily extended to fit into one’s specific needs.

By default, CodePipeline easily integrates with various AWS services as well as partner products and Services.

It comes with a variety of pre-built plugins that We use along with custom plug-ins at any point in the process pipeline as required.

With AWS CodePipeline, we can incorporate our existing code source, build, and deployment tools into Our pipeline. Here’s a brief insight into the various possibilities:

Another reason why We love AWS CodePipeline is that it provides us the ability to view every detail regarding the execution of a pipeline.

Starting from the start and end time to run duration and execution IDs, We can keep track of what, who, and when a task has been carried out.

It also allows us to review the real-time status of Our Pipelines along with the facility for:

A unique thing of AWS CodePipeline is that it lets us create notifications for various events that might impact our Pipeline execution.

Depending on our needs, We create notifications for situations such as a change in the status of the pipeline, stage, or action in the AWS CodePipeline.

Concerned users receive notifications with AWS simple Notification system and come with a status message. It also mentions the resources whose events generated that specific notification.

With such detailed notifications, it becomes easier for us to track, manage, and react to changes occurring in a pipeline execution.

AWS CodePipeline also provides features for Security. One of which is Access control.

It is because of AWS Identity and Access Management (IAM) that CodePipeline provides the facility to manage who can or cannot access as well as modify our release workflow.

We use IAM users, IAM roles, and SAML-integrated directories to grant access to users.

So no random person without permission can carry out or modify nay task in the Pipeline.

It ensures complete safety and security of the CodePipeline Workflow.

Although AWS CodePipeline automates the delivery process, it also provides the facility to prevent specific changes from moving through the pipeline.

We achieve this by adding an approval action to any stage or point in a pipeline where We want to stop the execution.

At this point, only someone holding permission tp access the Pipeline can approve or reject the action.

If the action is approved, the pipeline execution gets resumed.

If rejected or if no one takes the necessary action within seven days, then it is considered that the action has failed, and the pipeline execution comes to a halt.

With each passing day, We at ChromeInfotech strive to upgrade the quality of Our Development Services.

And tools like AWS CodePipeline are precisely what helps us to achieve that.

Amazon’s CodePipeline is a powerful and reliable tool that makes it easier to manage the entire Software release cycle and process.

In addition to making the lives of developers much easier, it also results in faster and quality deliveries.

So it’s a win-win situation for both us as a software development company and as well as for Entrepreneurs looking to expand their business with a Digital Solution.

At ChromeInfotech We house developers holding experience working with AWS CodePipeline which facilitates us to stick to DevOps principles.

With expertise in DevOps and AWS CodePipeline, Our developers can guarantee you Smooth, Efficient and Faster Software releases.

If you are someone who aspires to go beyond traditional practices and embrace new, state-of-the-art methods, then, by all means, please do reach out to us.

By implementing such practices and tools in your Software Development Project, We can provide you a competitive edge over others.

With increasing demands and expectations of Users, the day is not far away when DevOps and tools like AWS CodePipeline will take over the Software Development Space.

So it’s time that you too should start leveraging the features and benefits of such modern development tools and services.

Lastly, I would appreciate it if you would drop your queries or feedback regarding this blog in the comment section below.