Node.js is one of those technologies that are taking the development landscape by a storm. Thanks to Node.js, JavaScript, which is essentially a front-end development language, has made its presence felt in back-end too. And to further add to its features and functionalities, Developers have come up with numerous Node.js Frameworks for Web development. Now in this Blog, I am going to focus on some of the best and top Node.js Frameworks that you can use to speed up your Node development Project and to take it up a notch.

But first, What are Node.js frameworks?

Well, To understand this, you need to know what exactly node.js is?

Node.js is an open-sourced JavaScript-based runtime environment. So Node.js is not a framework. What it does is that it allows JavaScript to be used in the server side too so that a node.js developer can build an entire App using a single language.

So to build a Node.js application, you would need to make use of various Node.js frameworks. These frameworks are based on the principles and approach of Node.js and provide a skeleton on which you can build up your App. They not only extend the functionalities of node.js but also come with new, out-of-the-box features that will:

So the next question is which Node framework  you should use for your Project or Which is the best Node.js Framework?

7 Best Node.js Frameworks that you shouldn’t miss out in 2019 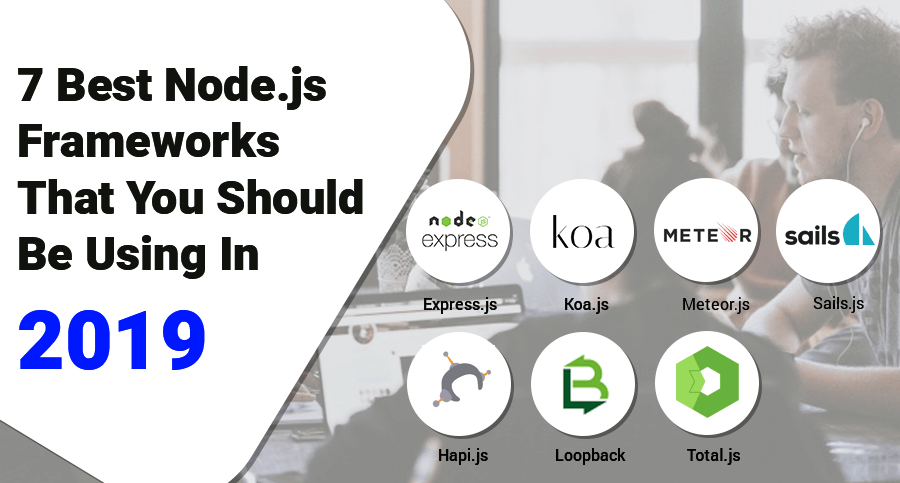 Express.js is one of the most popular Node.js Framework for building Web Applications and APIs. It is Free to use and works under the MIT License. It is also termed as the “de facto standard server Framework” for Node.js.

The main attraction of the node.js express framework is that it is designed to act as a Routing and Middleware Framework of node.js. It can help manage your servers and routes by creating an HTTP server in node, forming a layering in the middleware structure and establishing response/request functions. An Express Application can make use of the following types of middleware:

Being a minimalist framework, the node.js express framework can provide you some additional built-in features and robust express API without the expense of overriding the powerful Node.js platform. Moreover, it has excellent third-party Integrations such as Pug, Mustache, EJS, etc. and is another plus point of this Framework.

The express framework is popularly known as one of the 4 components of MEAN Stack, a Full-Stack JavaScript Framework powered by Node.js.

Furthermore, you can also use frameworks such as the Kraken.js suite which is built to extend the node.js express framework.

What is Koa Framework?

Koa.js is a comparatively newer Node.js server Framework developed and maintained by the creators of Express.js. It is a minimal and flexible Node.js Framework that comes with an extensive set of features for development of Web and Mobile Applications as well as APIs.

The Koa framework relies on some fantastic next-gen ECMAScript(ES6) functionalities like Generators which can get rid of Callbacks and can handle errors in a better way. Also, it was built to provide more robust scaffolding on which developers can build their Apps.

Koa Vs. Express: A brief comparison

Koa can is the next level Express framework. The creators developed Koa to fill in the drawbacks present in Express.js. Here are the instances which can make a Koa seem to be a better option than Express.js: 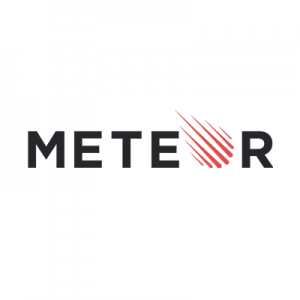 Meteor or Meteor.js is a free, open source and Isomorphic JavaScript based Framework written in node.js. Being a full-stack Node.js app Platform, it is used for writing cross-platform codes for iPhone, Android, and Web. With JavaScript both at the front-end and back-end, it results in rapid software development. Also, the meteor framework uses Cordova to create hybrid mobile Apps from Web Applications.

The Meteor framework supports Os X, windows and Linux and comes with a built-in platform-as-a-service (Paas) called as Galaxy. So it is Cloud Compatible too.

Another eye-catching feature of the Meteor Framework is Real-time updating. With the Meteor Node.js framework, any changes that you make gets automatically updated in all the layers of the application, from the database to the template. This is the reason why Meteor is perfect for building Real-time Applications and Collaboration tools.

Moreover,  Meteor.js is backed up by numerous Meteor packages that can significantly ease up your work by providing ready-to-use solutions for your App. It even has a Website that can be used to find and manage these Smart Meteor packages.

With all these cool advantages, it would be wrong not to include Meteor in this list of top Node.js Frameworks.

Sails.js is a real-time node.js framework for enterprise level applications. It works on the familiar MVC pattern of Ruby on Rails and is considered as a highly compatible framework with APIs that are data-driven, bearing a scalable, service-oriented architecture.

Apart from being built on top of Node.js, it is also based on Express.js, hence allowing it to handle HTTP requests. Moreover, migrating your node.js app from Express to Sails won’t be a pain since your Express routes will fit in perfectly with your Sails app.

Another aspect that is undoubtedly going to impress you is that with Sails.js, you can use any front-end framework that you love working with. Be it AngularJS, Vue, mobile development technologies like Java and Objective C or any other technology, The Sails framework is compatible with all.

Also, if you are someone who prefers one database over the other, then here’s good news for you. Sails.js encompasses the powerful Waterline ORM, which makes this node.js MVC framework compatible with any database that you are using.

But what takes the trophy is that Sails.js automatically generates REST APIs which you can use to carry Out various actions like Search, paginate, sort, filter, create, destroy, update, and associate dentists. Just run “sails generate API dentist,” and you can get blueprints for your backend with even writing any codes.

This node.js enterprise framework further simplifies your work by eliminating the requirement for you to write different codes for WebSockets and HTTP.

If all these weren’t enough, Sails.js also stands strong in terms of Security. It comes with various policies ( simple, reusable middleware functions) which provide essential security and some access control. 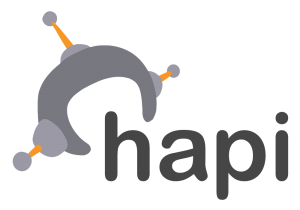 What is Hapi Framework?

Hapi.js is a reliable and robust Node.js Web framework for building Web applications. And among all the Node.js Frameworks that I have listed here, Hapi is the most fitting node.js framework for building enterprise-grade Solutions. After all, Hapi was created Walmart, one of the largest retail enterprises as a solution to handle massive online traffic during their Black Friday Sale. They built up this framework when they discovered some pitfalls in Express, mainly difficulty in splitting the Express code into chunks with growth in the application. So to overcome this limitation of Scalability and maintainability, Walmart came up with Hapi.js.

Hapi.js was built to adorn a plug-in based architecture that allows developers to work in sections without majorly disrupting the code base. As it is born out of Express.js, Hapi also forms an intermediate between the Server and the Client side. But it differs from express in many aspects. The Hapi Node.js Framework is more inclined towards enabling developers to focus on writing reusable logic rather than wasting time in building infrastructure.

A unique feature of Hapi is the Handler function. Using this, you can pass on some configurations with a request so that the function carries out a specific task as per the configuration.

Here are the highlights of the Hapi Framework due to which it made it into this list of best Node.js frameworks:

Loopback is yet another popular Node.js framework that allows the quick development of dynamic end-to-end REST APIs. Loopback is often used synchronously with the term IBM Strongloop. That’s because Strongloop is the Company that built the Loopback framework in the first place but is now acquired by IBM. So legally, Loopback is now maintained by the Industry Giant IBM. It packages a wide range range of features and functionalities such as:

With these features, Loopback is considered to be the most suitable node.js framework for any Project, be it small scale or complex enterprise leveled.

Developers at ChromeInfotech love using this framework because it allows the creation of models according to your schema and in case of an absence of schema, there’s always the option of dynamic models.

Total.js is a full-featured node.js application framework that supports MVC architecture. It is meant for building powerful Websites, real-time apps, REST services and also for IoT apps. It is a total package and comes with everything that an ideal framework should have. This includes:

Moreover, there are various versions of Total.js like Total.js Eshop, which stands out as one of the best Solutions for small businesses that want to build an e-commerce Application.

What makes this framework gain a place in this list is that it aids super fast development and great stability with low maintenance cost.

And if you love working with the Laravel framework of PHP, ASP.NET MVC or the Django framework of Python, then this Node.js Framework will surely impress you.

Here are some more Node.js Frameworks that seems to be quite promising and could be the one for your Project:

At Chromeinfotech, you can find developers who adopt the right-fit node.js framework along with crucial tools and technologies such as Blockchain, Chat SDK, Payment gateways, App Analytics, Tableau, Map Integration Platform and many more.

People often ask the question: Is Node.js good for backend?

Well, Node.js is a server-side runtime environment that was specifically designed to allow JavaScript to be used as the Scripting language for writing Server-side applications. So Node.js is obviously for the back-end, and it does a pretty good job. But it is these Node Frameworks that brings out the best benefits for Businesses based on the core node.js features.

How beneficial or useful Node.js will be for your Project depends on the Node.js application framework that you make use of and whether or not it fits into your Project requirements.

Node.js is one of the most popular server-side technologies, and it will only continue to grow in the future.

And as it grows, We will see more and more of these Node.js frameworks. So it is crucial that before including one in your technology stack, you should have a proper understanding of what the framework has to offer to your Project and how can it benefit you. Adequate evaluation of these node.js Frameworks can help you to choose the one that can take your Project a long way ahead.

So If you are searching for a node framework to include in your App development Project, then you can consider the ones that I have mentioned above.

I am sure one of them will interest you concerning your needs and requirements.

Also before you leave, please do drop in your feedback on this blog or any queries that you have in the Comment section below.